A giant eight-acre puzzle is being put together right now in the Central West End. St. Louis College of Pharmacy is in the midst of the largest expansion in its history. Three of the largest pieces in the puzzle include two new buildings, which are six and seven stories tall, and a major renovation of the College’s existing academic building, Jones Hall.

“This is a transformative time in the history of St. Louis College of Pharmacy,” says College President John A. Pieper. “We’ve sought out the best minds and most skilled individuals in the region to help us provide the resources we need to prepare our student pharmacists for their changing role in the health care system, and transform the College into a global leader in health care and pharmacy education.” 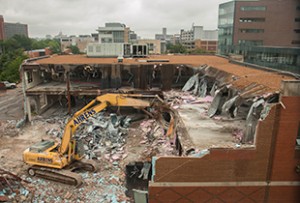 “We worked at night, which was a big change for us,” Chong says. Normally, construction begins in the early morning hours and wraps up mid-afternoon. But to minimize disruption to students, Chong and Minion knew crews wouldn’t begin their day until 3:30 in the afternoon. It turns out that doing construction at night worked well for Chong since Jones Hall lacks a loading dock to bring in construction materials and haul out debris.

“We had to bring it all in through the front door,” Chong says. Those materials included everything from 15-foot-long steel beams to wall board and finishing nails.

For the men and women on the job site every day, it took a little adjustment to seeing the sun set on their shift, rather than rise.

“It was pretty different,” Minion says. “But no challenge we couldn’t handle. It helped because there was less traffic, fewer disruptions. They can’t shut down school while we’re doing the work.”

Chong and Minion have been working together for several years including projects at the Saint Louis Art Museum, Better Family Life, and the University of Missouri-St. Louis. Because of their familiarity with each other, major hurdles like pumping concrete to the second floor, were cleared smoothly.

The project finished a month ahead of schedule, which will allow faculty and staff at the College to move offices quickly and be prepared for the first day of classes. When students return they’ll not only enjoy more space in Jones Hall, they will have access to a 213,000-square-foot academic and research and academic building and library.
“Throughout this process, we’ve committed to build for the future to provide outstanding facilities for the campus community,” Pieper says. “Our students, faculty and staff will be amazed at how our campus has changed over the summer and how much it will continue to change over the next year and a half.”

Work on the final piece of the puzzle is already underway as demolition clears space for a 190,000-square-foot student center. Ahrens Contracting, a well-known women-owned business, was hired to remove a two-story building which stood on the site. There’s not much extra room around the building, which is bordered by a parking garage, the property line, and green space.

“Our crews are well-versed in doing work in tight spaces,” says Patricia Ahrens, president and owner of Ahrens Contracting. “It’s been a very meticulous process taking the equipment in and the debris out.”

It’s a two week process to fully remove Whelpley Hall. The new building, which includes a student center, gymnasiums and a new cafeteria, is scheduled to open in December 2016.